Breaking News! Currently, hundreds of climate and social justice activists are shutting down San Francisco’s financial district with mass civil disobedience at the front door of climate profiteer Bank of the West.

They aren’t demanding superficial reforms from morally bankrupt climate profiteers like Bank of the West. They’re demanding a radical transformation of our economy and our political system, and they’re setting an example for how movements against climate change and capitalism can take bigger, bolder action. 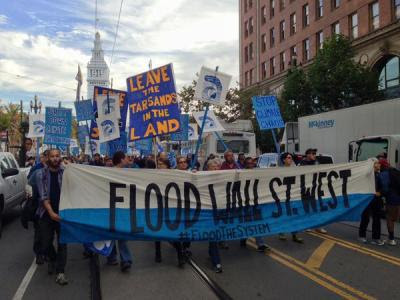 Join us in flooding Wall Street West by sharing this image and statement.

Bank of the West, a subsidiary of BNP Paribas, is the poster child of climate profiteering. BNP Paribas is a French bank directly profits off of massive investments in the coal industry. The financial giant is currently paying lip service to corporate responsibility and trying to greenwash its investments in the climate crisis by bankrolling the United Nations’ climate talks in Paris

#FloodtheSystem is a series of coordinated mass actions across the US and Canada in the leadup to the United Nations climate negotiations in Paris this fall. It is a critique of the systems (capitalism, white supremacy, patriarchy) driving the climate crisis while targeting tangible institutions like Big Oil, Big Coal and the banks that love them profiting from it.

Join us in flooding Wall Street West by sharing this image and statement.

We are on the precipice of catastrophe. Crushed between the pincers of climate chaos and economic, social and political inequality, our global society is hurtling toward a breaking point. It’s up to us to bend the arc of history toward survival.

Like Naomi Klein said “The climate movement needs one hell of a comeback.” Now is our chance.

For a just and stable climate,