The Avaaz movement’s perspective on the Paris COP21 agreement:

World leaders at the UN climate talks have just set a landmark goal that can save everything we love! This is what we marched for, what we signed, called, donated, messaged, and hoped for: a brilliant and massive turning point in human history.

In the last weeks, our community has played an extraordinary role to help push through this historic deal. After we smashed global records, marching in the hundreds of thousands all over the globe, we brought our voices into the summit — literally — with a chorus of members’ personal messages as delegates entered, Avaaz staff then delivered our petition directly to the UN Secretary-General, kicking off an incredible string of campaigns.

From the starting gun to the finishing line of these talks, every time a government blocked progress, we responded, and when they led the way, we heralded them. Our community has called our leaders to go further in 45 different actions in just 14 days. And we had incredible impact:

And that was just the beginning — our marches, messages, and video appeals were played on loop outside of the main negotiation room. Heads of state, ministers, and all of their staff were reminded of us and our calls to action every day.

Then, after we plastered Paris with posters of the faces of the worst fossil fuel lobbyists and climate deniers, calling on ministers to ignore them, the lobbyist for the world’s largest mining company withdrew from the talks altogether!

When it became apparent Argentina and Saudi Arabia were major blockers, Avaaz members in both regions went into urgent action, and we were all over the media. In Argentina, the newly elected President, who had committed to renewable energy, was inundated with messages to send a delegation to Paris. And within days they came. The Saudi government was so worried by the public attention that a lawyer representing the Kingdom called our staff to say they would sue.

And just a few hours ago, the German minister personally thanked Avaaz members for making her and her delegation feel consistently supported throughout the negotiations.

And that’s just a few of the amazing campaigns we rallied around in this short time!

Everyone expected failure from the climate conference process. Leaders told Avaaz staff over and over again, “people don’t care about climate change” . But we knew better. We knew this community of millions consistently chose saving our planet as a key priority for our work together, year after year.

Since 2007 — in Bali, Copenhagen, at G7 summits, in key capitals, and now in Paris — this is how we helped show leaders how wrong they were:

Refusing to lose hope (2010-13): While the result of Copenhagen was disappointing, our movement never gave up hope. Instead, in every country, at every opportunity, Avaaz members kept fighting tooth and nail for the policies we needed on climate. We staged a protest at the Durban Summit in solidarity with developing nations, held candlelight vigils in the wake of the Japan nuclear disaster, and created a global petition of 1.5 million to save the precious Amazon.

Building our movement (2010-13): Copenhagen taught us we needed to be much bigger if we were going to defeat the fossil fuel lobby and move our leaders to action. And that’s what we did: growing from 3 million to over 30 million members!

The biggest climate march ever (2014): Working with many partner organisations and after months of preparation, we staged the biggest climate march ever on the eve of a critical UN Climate Summit — 400,000 people in NYC and another 300,000 across the globe — all with one powerful message: the world wants 100% clean energy. Weeks later, the US and China signed a landmark agreement to reduce emissions. The political momentum on climate had changed.

A time for climate heroes (2015): Using the momentum from the marches, we focused our attention on the richest economies and pulled out all the stops to support Germany’s leadership of the powerful G7. Thousands of us funded opinion polls and hard-hitting ads calling out key countries blocking climate progress, we delivered our 2.7 million-strong petition in person to all key German and French ministers — meeting in person with French President Hollande. Hundreds of Avaazers followed Germany’s Chancellor Merkel at nearly every public event she attended, urging her to be a climate hero. The result? G7 leaders said goodbye to fossil fuels by committing to phase out carbon pollution over the course of this century! The tide was turning.

For Paris and everything we love (2015): With the final countdown to Paris set, hundreds of thousands registered to march just before the crucial summit. Events and rallies were pulled together by Avaazers everywhere. But the tragic attacks shocked us all, making the planned mega-march in Paris and others across France impossible…

Avaazers then answered with hope and creativity, and in just a few days we collected and displayed in Central Paris an incredible installation of over 22,000 shoes symbolising all the protesters who couldn’t march — the Pope and the UN Secretary-General added their shoes, too! 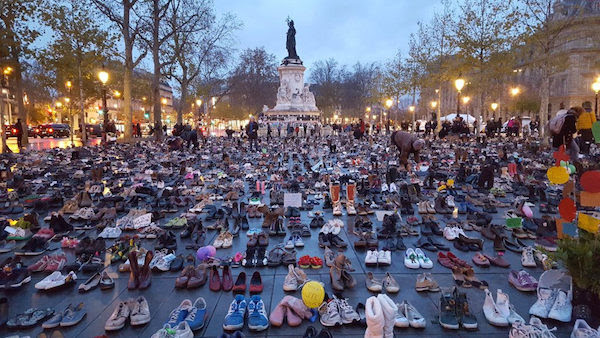 And as world leaders arrived in Paris, we broke our own record! From São Paulo, to Sana’a, to Sydney, over 785,000 people marched at 2,300 events in 175 countries united in one voice calling for a 100% clean energy future to save everything we love. Imagine if the hundreds of thousands expected had marched in Paris and across France, too!

Messages and footage from the global marches spread like fire, on the front page of dozens of major newspapers, covered by hundreds of global and national news outlets, and beamed on a big screen at the heart of the conference centre. The tone was set.

We have decades of work ahead of us to live up to the promise of this moment. We need more ambition to meet our 100% clean energy by 2050 target, improving on the benchmark of “the second half of the century” now in the agreement. We need rich countries to give more money to developing countries so they can skip coal altogether and lift hundreds of millions out of poverty. We need to push governments everywhere to keep the planet’s warming under 1.5 degrees so that island nations can survive. And most importantly, we need to make sure all our governments keep the promises they made here in Paris.

Most importantly, tonight sends a clear message to investors everywhere: sinking money into fossil fuels is a dead bet. Renewables are the profit centre. Technology to bring us to 100% clean energy is the money-maker of the future.

History delivers moments when the wind shifts, you can smell it in the air. The best of us harness that power, using it to fuel the new path. Like our brothers and sisters in South Africa who won legal equality, LGBTQ members in the United States who won the right to marry the people they love, Gandhi’s non-violent movement that gave birth to a new hope for India, we are on the brink of that new, sweet wind.

Let’s harness it together, let’s fly together under the sail of a common humanity, across the oceans, rivers and lakes that divide us. Let’s take the promise of right now and deliver our children a beautiful, safe, and clean future.

With excitement for all we will do together in the years to come,