Will the Democratic Party lead the resistance to Trump and stand at the forefront of the populist revolt currently brewing, or will we be forced to abandon it altogether as we build the truly democratic and sustainable communities and nation so many of us seek? On February 23 the party will choose its new leadership, and judging from the comments and behavior of many Democrats in Congress since the election of Donald J. Trump as President, it remains to be seen if Democrats have learned any truly insightful lessons from its breathtaking loss. Read on for an urgent message from the Progressive Democrats of America, the folks who helped convince Bernie Sanders to run for President of the United States. Please consider helping the PDA convince Democrats to chart an entirely new & progressive course for the future. – RR

Progressive Democrats of America (PDA) strongly supports our Advisory Board Member Rep. Keith Ellison for Democratic National Committee (DNC) Chair. We know Keith Ellison very well. We’ve worked with him on important legislation. We know he’ll bring the Unity, Experience, and Organizing we desperately need to make progress. His judgment is sound, his attitudes are positive, and his intentions are honorable.

The list of Congress members, unions, advocacy groups, and individuals who have endorsed Keith Ellison is long and growing. Here is his vision for the party, in his own words:

We must energize Democratic activists across the country and give them the tools to build the Party from the bottom up. Beyond a 50-state strategy, we need a 3,143-county strategy. DNC members are on the front lines in these states and counties, and we must harness your experience and give you a meaningful voice as we set the direction for the Party. In a DNC Chair, you need a partner and an advocate who will ensure you have the resources you need to win. 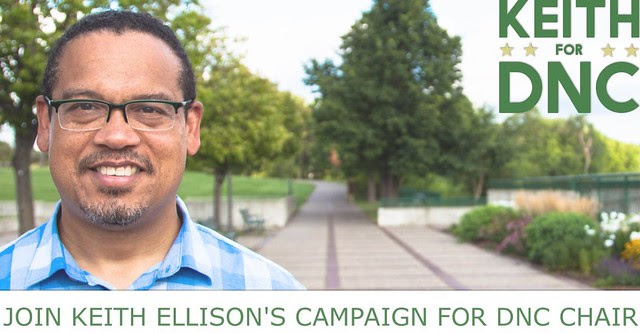 If you agree with Keith’s “3,143-county strategy” that would give you a meaningful voice in the Party, please donate generously now to help Keith win! Money tight? Then click here to sign on to help Keith in other ways. Connect with Mike Fox to help us push the Democratic Party toward the progressive grassroots.

A massive and still-growing groundswell of grassroots progressives, unions, and Democratic Party groups from around the country are working together to help elect Keith Ellison to be DNC Chairperson. Please click here to let Mike know if you are willing to help out! Several unions and public advocacy groups including the AFL-CIO, the United Steelworkers, Americans for Democratic Action, Communications Workers of America, the Working Families Party, Social Security Works, and of course Progressive Democrats of America, are backing Keith.

PDA’s friends Ben Cohen and Jerry Greenfield are as brilliant in their analysis as they are in making their amazing Ben and Jerry’s ice cream. In a recent op-ed, they wrote:

On Feb. 23, about 400 Democratic Party leaders will meet to elect the next chair of the Democratic National Committee. Their choice is between the usual party insiders and Rep. Keith Ellison, the co-chair of the Progressive Caucus and a young rising star, endorsed by Bernie Sanders, who can inspire the next generation of Democratic voters.

Who gets chosen will shape the future of the political party and the future of our country. We have one simple piece of advice: listen to the people, not special interests, not party elites, but the people. We know rank-and-file Democrats and independents don’t get to vote on who becomes chair of the party, but it’s time to think differently.

Since 2008, the Democrats have lost 11 governorships, 13 U.S. Senate seats, 69 House seats, and more than 900 state legislative seats. And in 2016, the Democratic nominee lost to an unlikable and unlikely buffoon. If the Democratic Party doesn’t change its direction, we’re likely to end up where we’re headed.

The 2016 General Election sent a clear signal to the Democratic Party. Voters are calling for change. Focusing on growing the middle class and addressing economic issues, such as living wages for the underpaid and underemployed, needs to be at the core of what the Democratic Party stands for. That is why the Executive Board of the Illinois Democratic County Chairmen’s Association has voted to endorse Congressman Keith Ellison for Chairman of the Democratic National Committee.

IDCCA President Doug House said “Congressman Ellison has the experience, ability to unify, the vision and fundraising experience with grassroots and large donors to lead the Democratic National Committee. His plan of grassroots organizing and training at the local level are at the core of what the IDCCA does. We are proud to stand with and endorse Keith Ellison.”

Step up and get involved! If you can, please donate generously now to help Keith win!. Money tight? Then sign up with Mike Fox to help us push the Democratic Party toward the progressive grassroots, by taking over the decision-making from the bottom up!

Local party positions at the precinct level are always opening up. Some organizing meetings to elect local and state party leaders have already passed, but some are approaching. We need your help now to take back the Democratic Party from the corporations and lobbyists! Please click here to let Mike Fox know if you are: currently an elected/voting member of your local, county, ward, or state Democratic Party; willing to run for a position in a Democratic Party entity; and/or willing to run for a DNC position.

We know taking back the Democratic Party from the corporations and lobbyists won’t be easy or cheap. We need resources to organize behind strong candidates for local, state, and national offices. Pitch in $500, $50, or whatever you can right now.

On to bringing the party back to it’s progressive roots!

Remember: we can’t do anything without your generous support